I’m always honest with you guys, so let’s be real, I don’t like exterior projects. I’m all about interior projects (you know, in the air conditioning and without the bugs), because exterior projects are always uncomfortable. It’s either too hot or too cold or muggy or rainy. Then, there’s the added fear of bugs and snakes and other gross rodents that I can’t name. All of that being said, exterior projects need to be done and we have a laundry list of projects that are in the queue. I motivated myself in June to work on Trimming Back Boxwoods and Shutter Removal and I’m proud to say that I did about 97% of it on my own, without help, and without freaking out when I saw a bug (or two or three). I draw the line on snakes though. If there’s a snake.. I’m done. Ha!

I’m pretty proud of this project and think it really helped with our curb appeal, so I’m going to stop talking and show you! 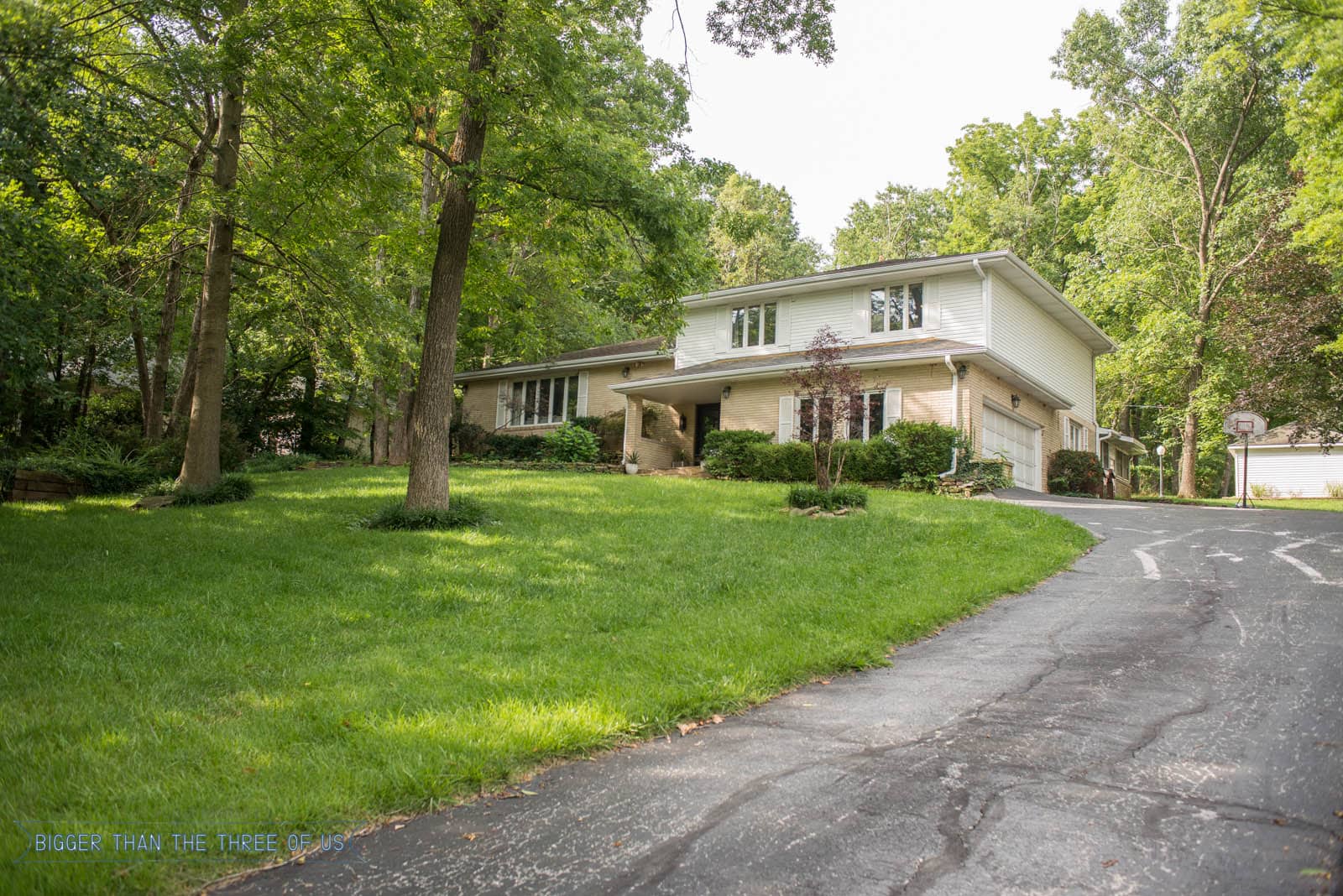 I didn’t think to take picture of the house right before starting this project, so the first two “BEFORE” pictures are from last summer! The area that I wanted to tackle was the landscaping right in front of the garage.

If you want to see more of our landscaping, you can see our house tour for details and pictures!

I don’t think you can tell from these pictures, but the bushes overhung the stone wall and would scratch vehicles that wanted to use the circle drive. So, not only was it not working for us because of that, I really think it was making the house look more dated.

You’d think that trimming back boxwoods wouldn’t be a big deal and something that I’d just naturally think of, but landscaping ideas and motivation just don’t come naturally to me. I don’t enjoy trying to visualize the outside and I don’t know where to start with picking out new plants and products. 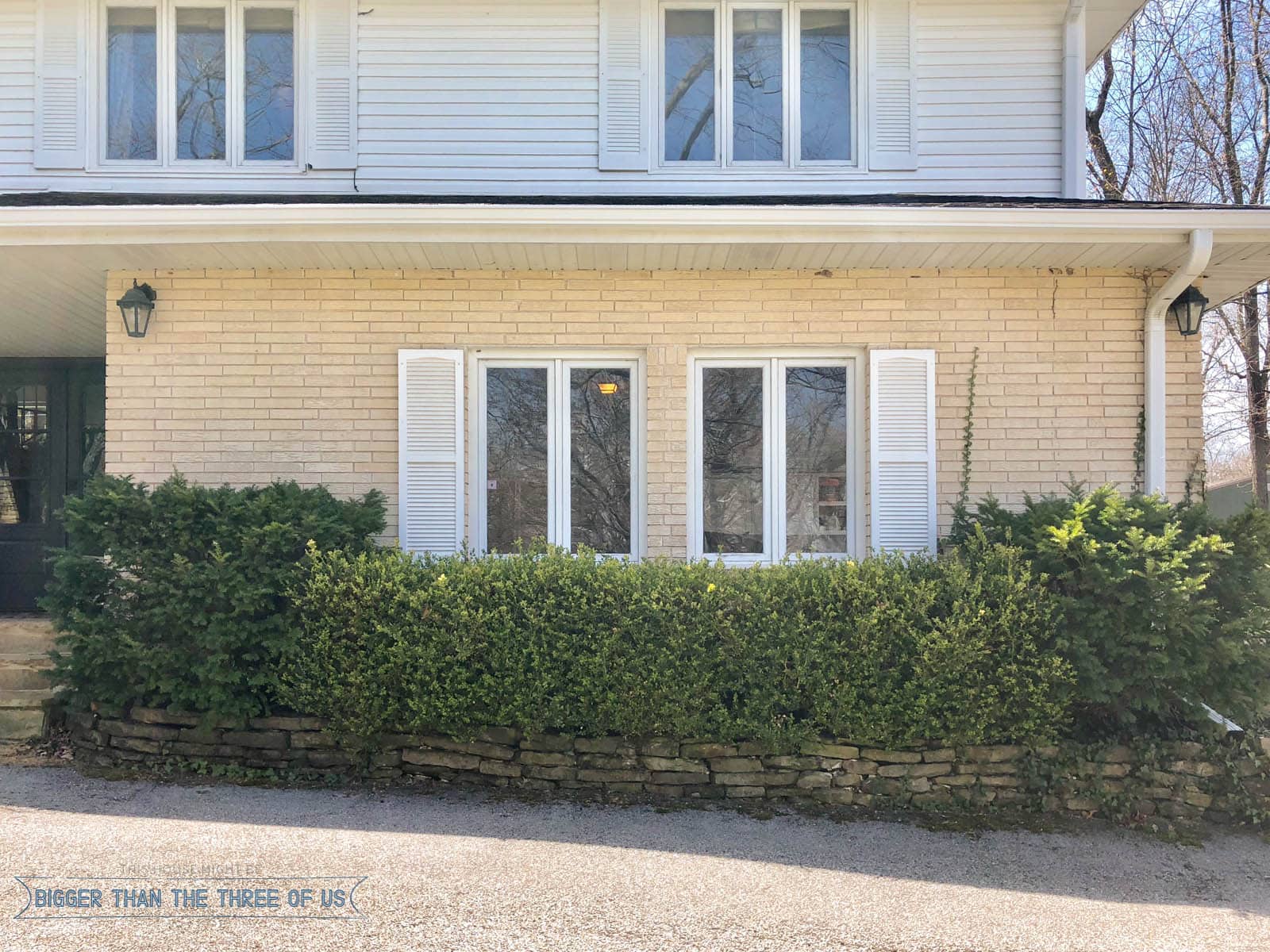 After talking about the overgrown bushes on Instagram stories (and hearing some amazing feedback for either trimming the boxwoods way back or taking them out), I decided that I didn’t like any of the landscaping and wanted to rip it all out.

So, one early morning in April, I went to work and went for it. 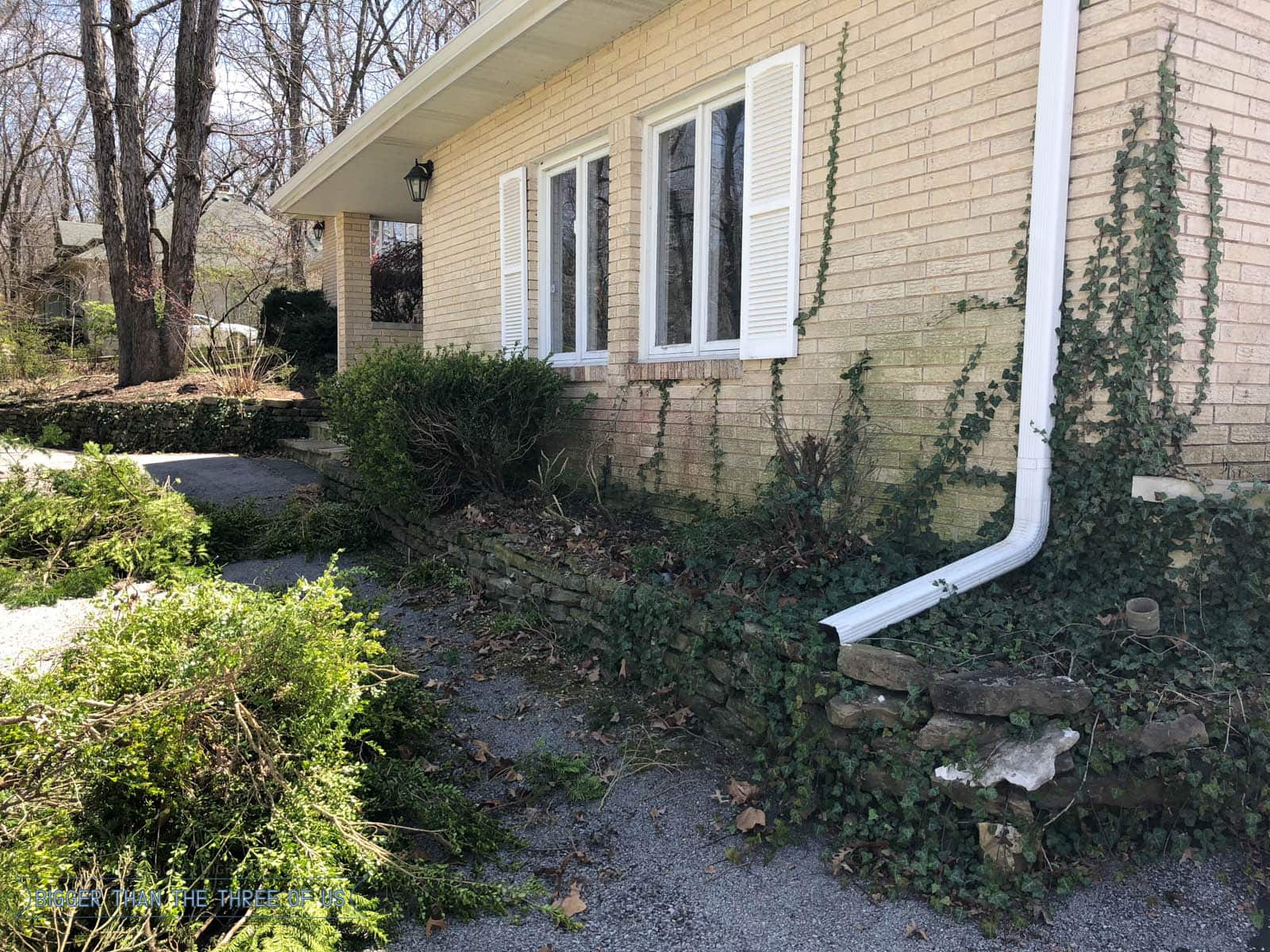 It quickly became evident that getting the bushes trimmed down was a big job, but one that I could handle. On the other hand, getting the root ball out of the soil was a job that was proving to be VERY difficult. 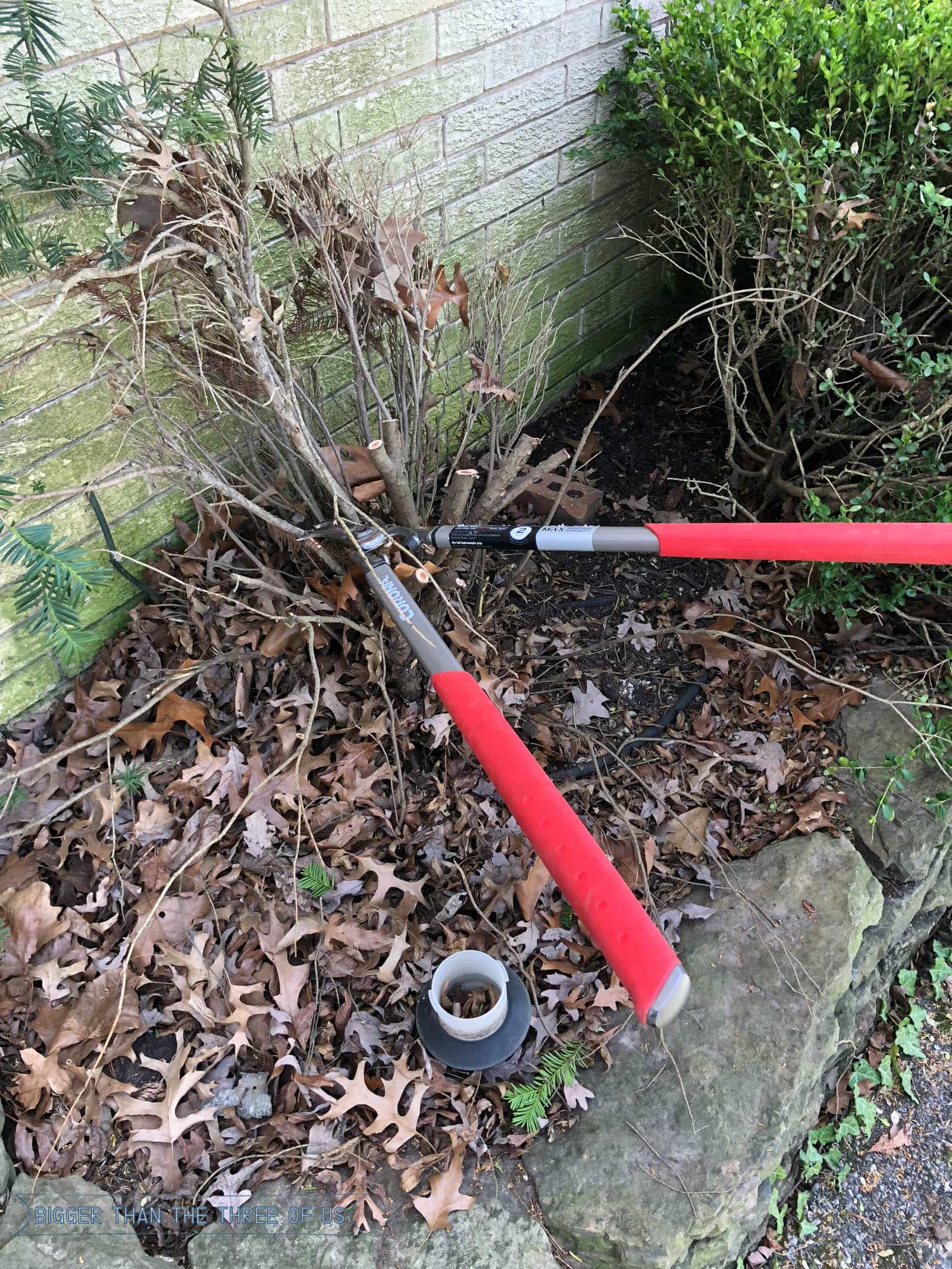 Since the root balls were going to be super hard to get out, I decided that I would just leave them in the landscaping bed and see if the boxwoods would grow back in. IF I knew I was going to do this in the first place, I would have left a bit more to the boxwood instead of trimming the boxwoods way back. It all worked out in the end, but you’ll have to read a bit more to see!

Ok, so I decided to leave the four boxwood stumps but pull out the two overgrown (evergreen?) bushes that flanked the sides of the landscaping bed. This is where the 3% of help came in. I couldn’t get those out of the soil. Luke came in and saved the day (after his own struggling with them). 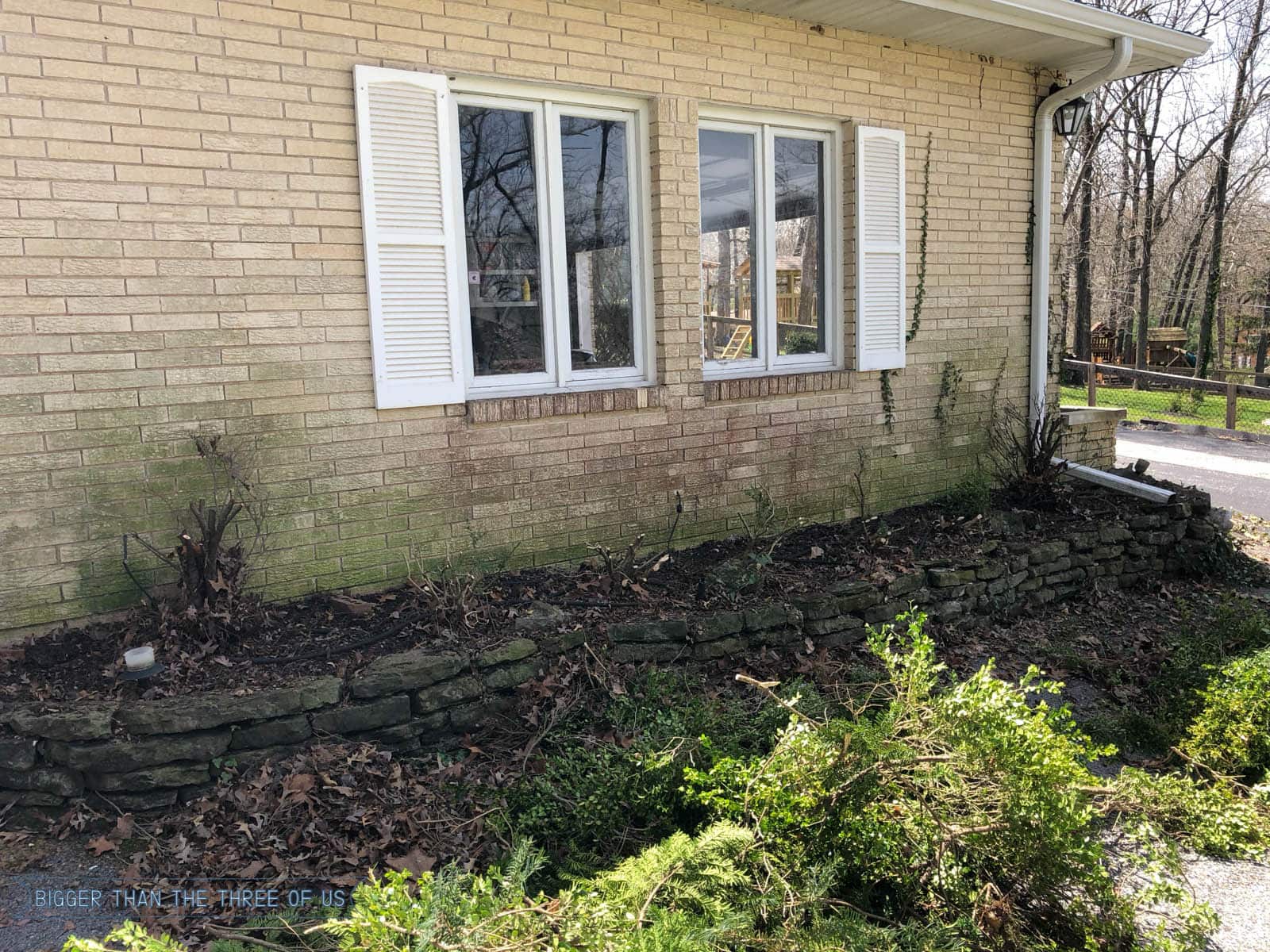 If I’m completely honest, I was scared at this point. It looked much WORSE than it did before I started the project. That’s generally how a project goes over here but when all your neighbors can see it, well, it’s more intimidating for sure.

Since the shutters were able to be reached, I did something that I’d been thinking about for awhile and I removed the shutters. 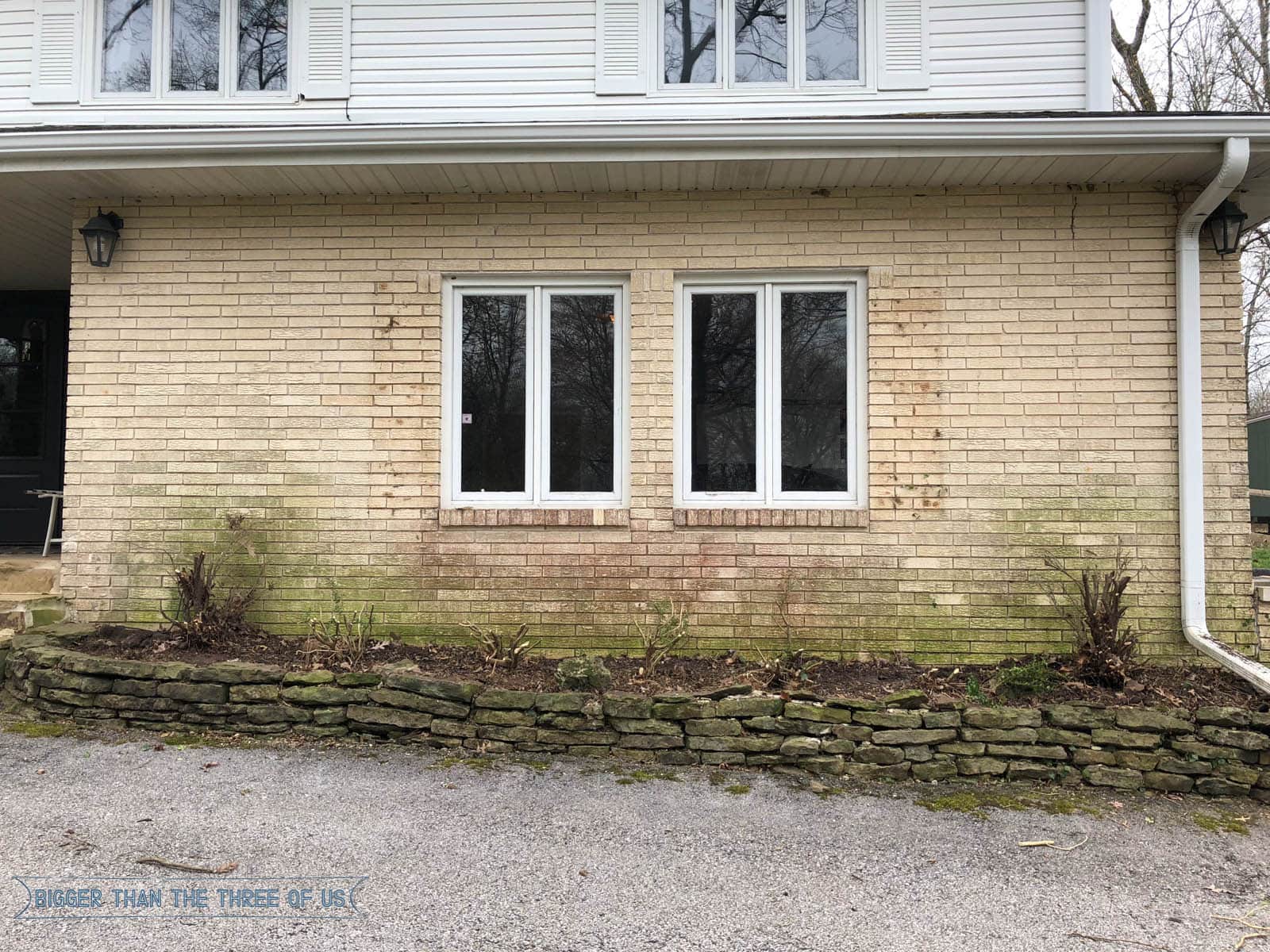 From there, you can see that we needed some major power washing on the brick. I actually love to power wash so that was kinda fun! 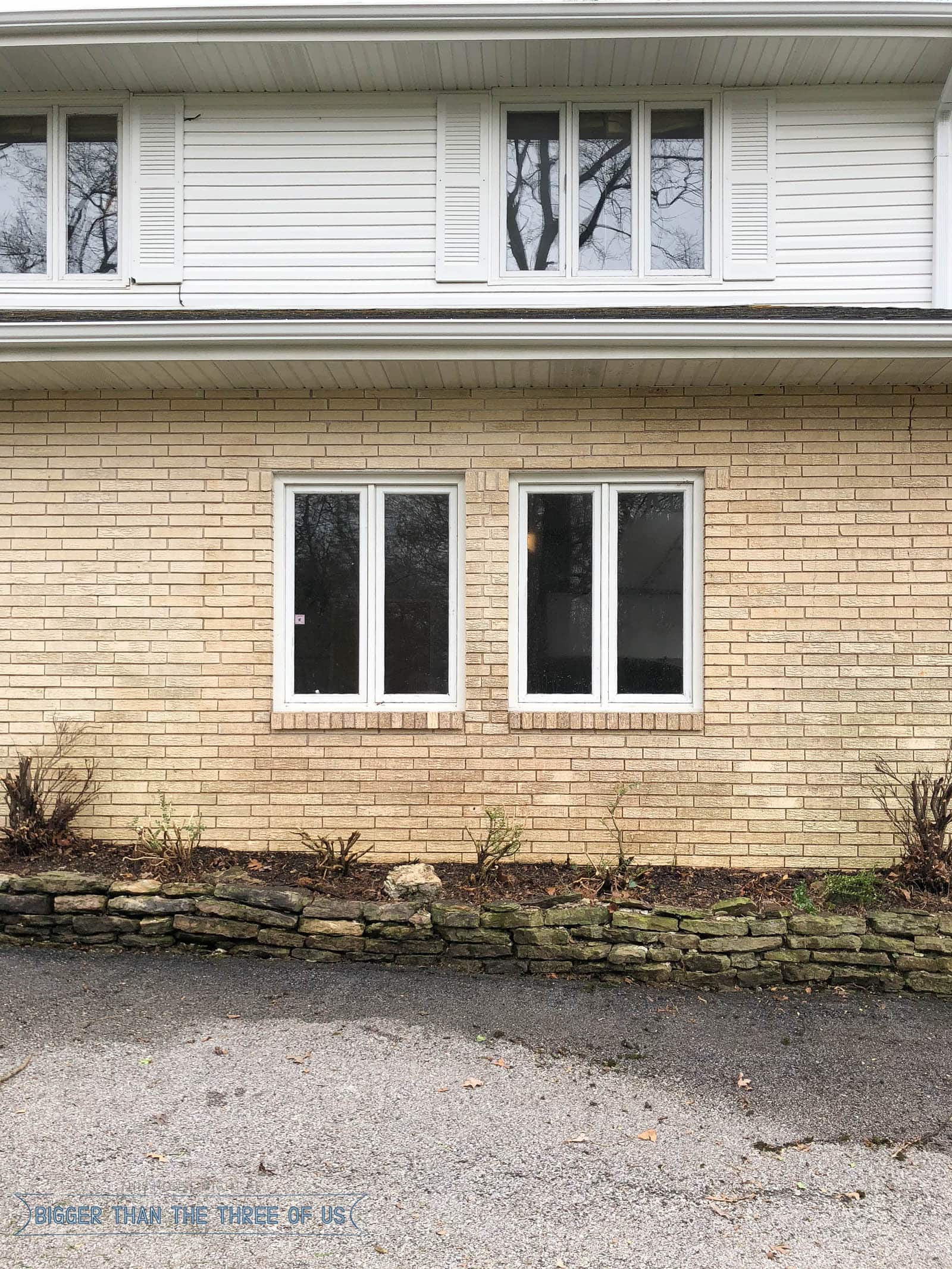 It’s still a bit wet in these pictures but the brick cleaned up pretty well with the power washing. 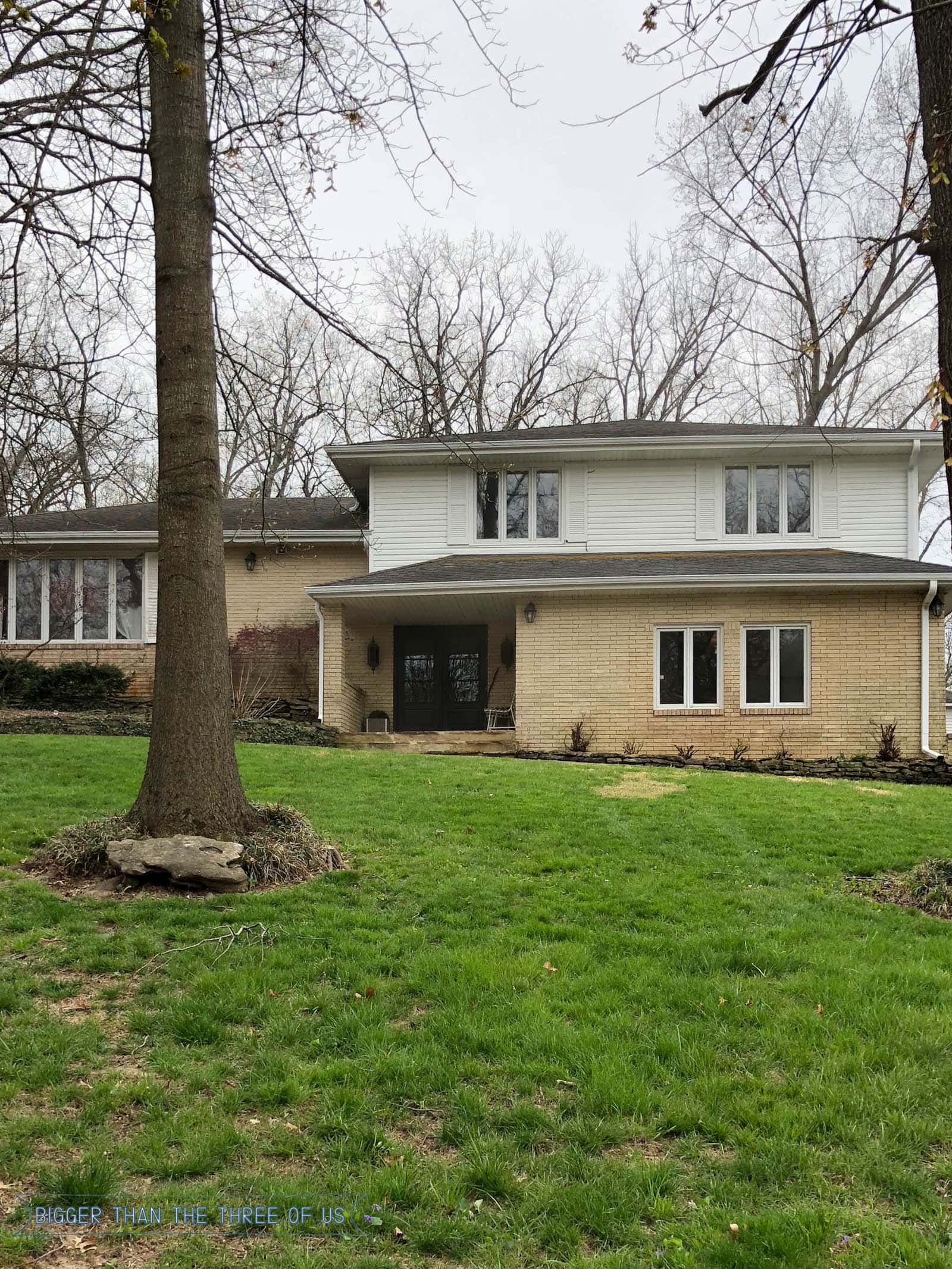 From there, I planted two deer-resistant plants (although I can’t remember what they are) on each side of the bed. I also put in three mini-fern-type plants, hoping that they’d survive since that area doesn’t get much sun.

We added some mulch and let the plants grow.

As of August, here is where we are: 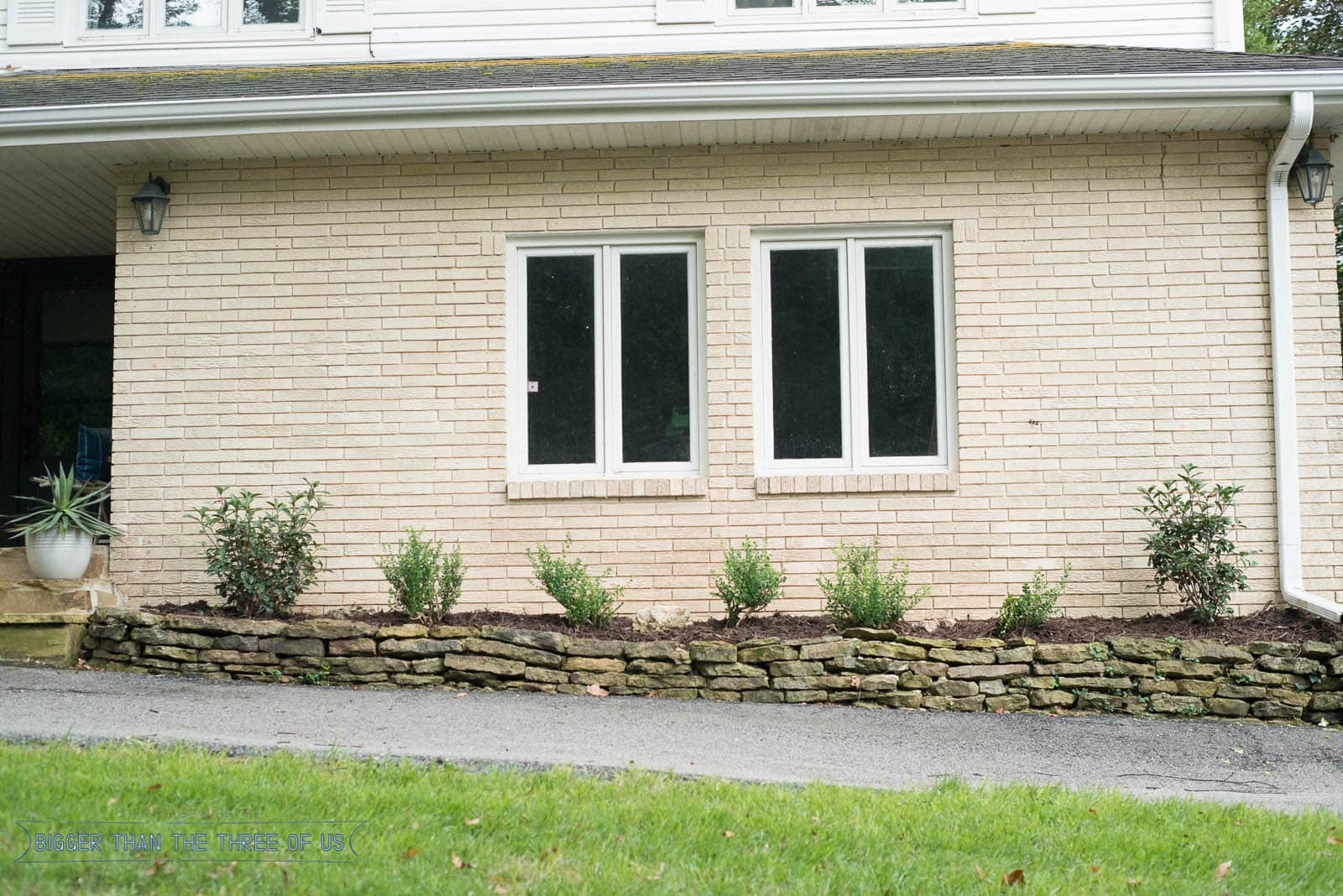 Let me give you a before and after so you can really appreciate how much trimming the boxwoods back helped our curb appeal! 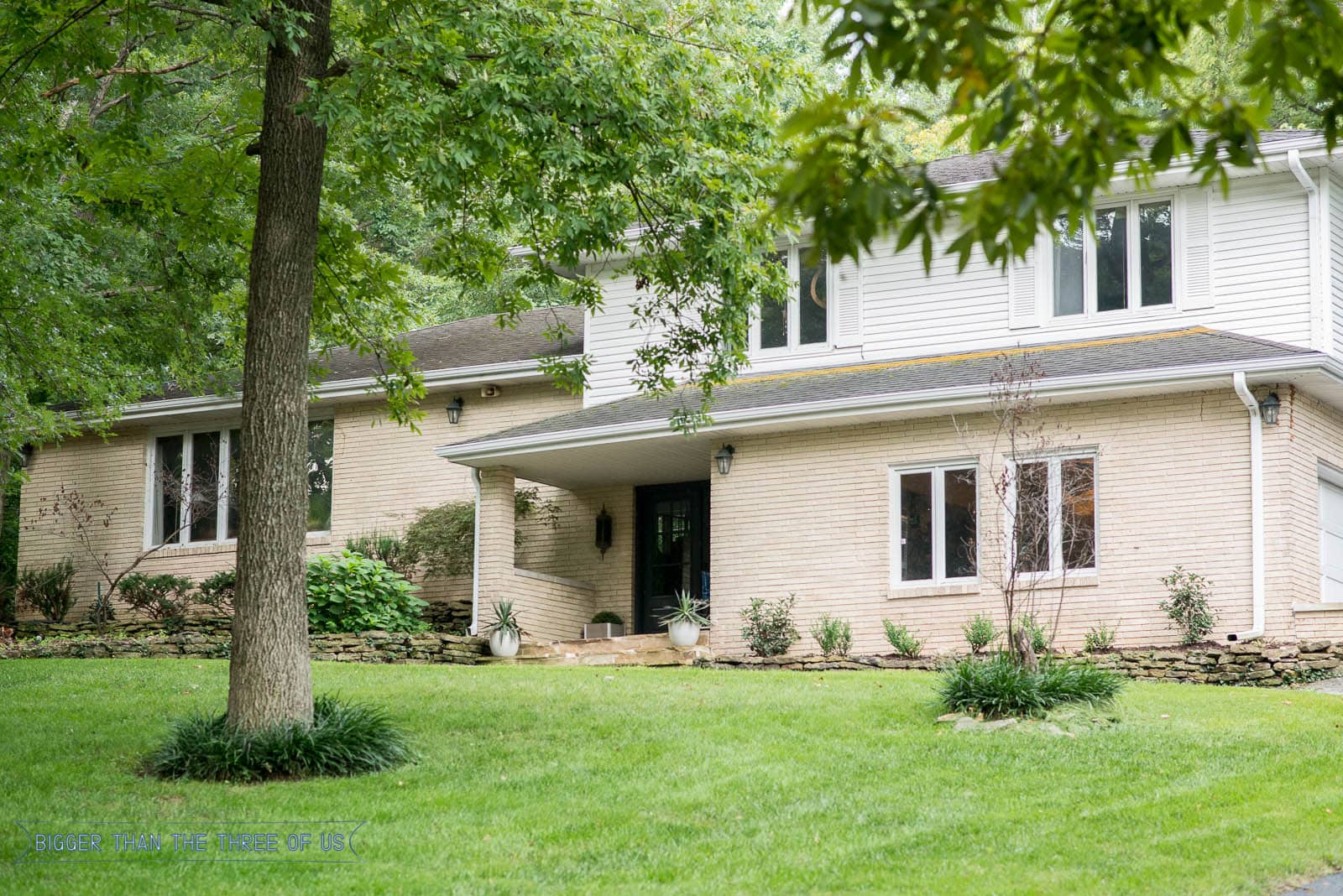 Gosh, I just love the new change! What do you think about the shutter removal though? I think I like it better, but then again, I don’t feel like it’s a huge, noticeable change. Thoughts?

If you need a few exterior tools to do a project like this, we love these: