Christmas is just around the corner so I thought it would be a perfect time to share some Christmas Presents for Boys ideas.

I’m always on the hunt for some good present ideas for my little man. I’ve rounded up a good collection of books, active toys, shoes, legos and more and think this list would really appeal to kids under the age of 11. Some of these things we own, some are on my list to get and some are just really cool looking; all of which, we use or I could see us using. So, here’s 30+ items that I think you’ll love too!

END_OF_DOCUMENT_TOKEN_TO_BE_REPLACED

Make your kiddo’s dream come true with a kids room loft! Use this step-by-step tutorial to learn how to build a loft in a closet.

We are IN LOVE with our closet loft and want to help you make a special spot for your kiddos! Seriously, take some of this tutorial or all of it and customize to build a closet loft in your house. I know you won’t regret it. 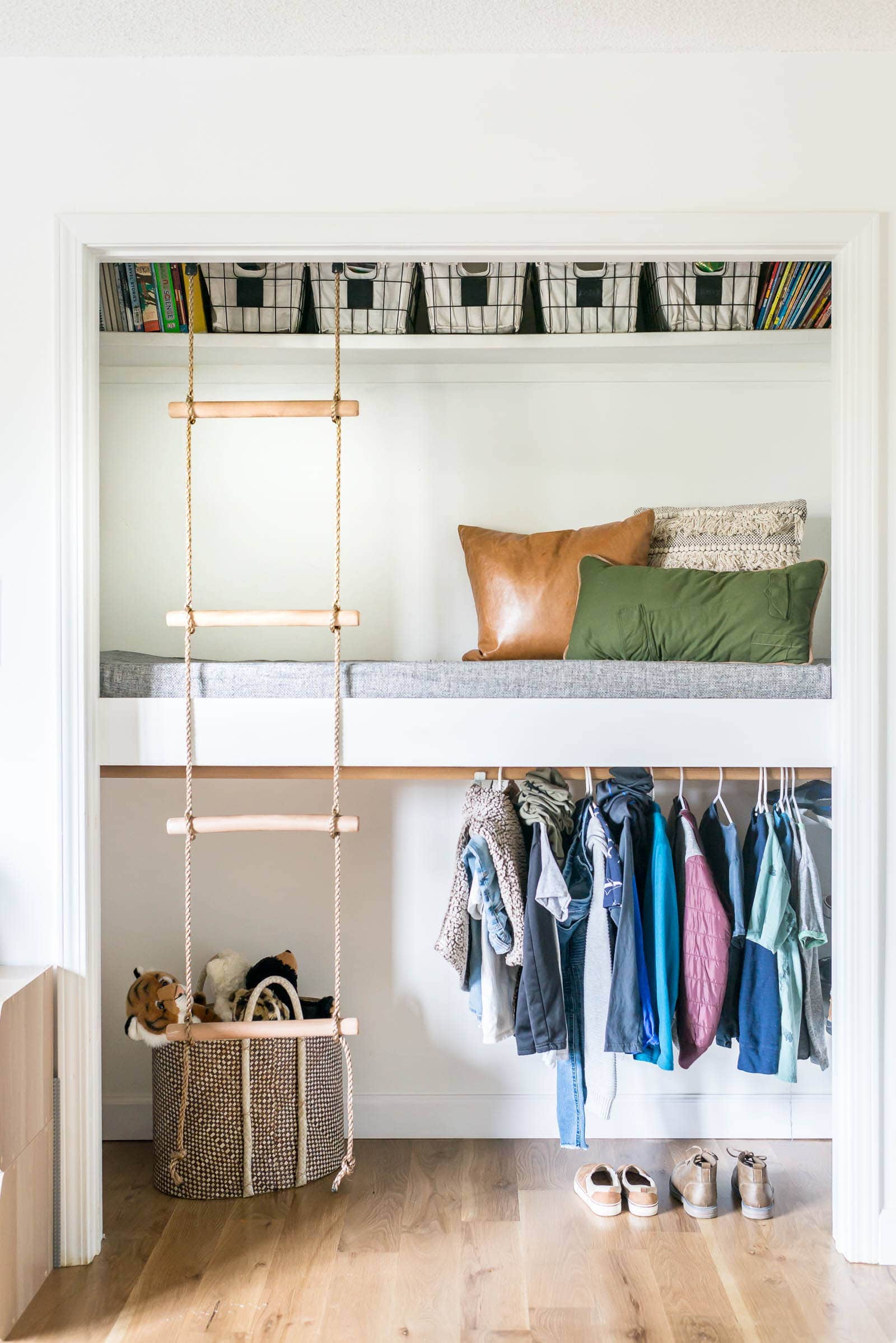 END_OF_DOCUMENT_TOKEN_TO_BE_REPLACED

Simple DIY Pulleys for kids can be so much fun! Use this tutorial to DIY a bucket and a pulley for a treehouse. Treehouse accessories can be super pricey, but this project won’t break the bank nor be a huge time investment. 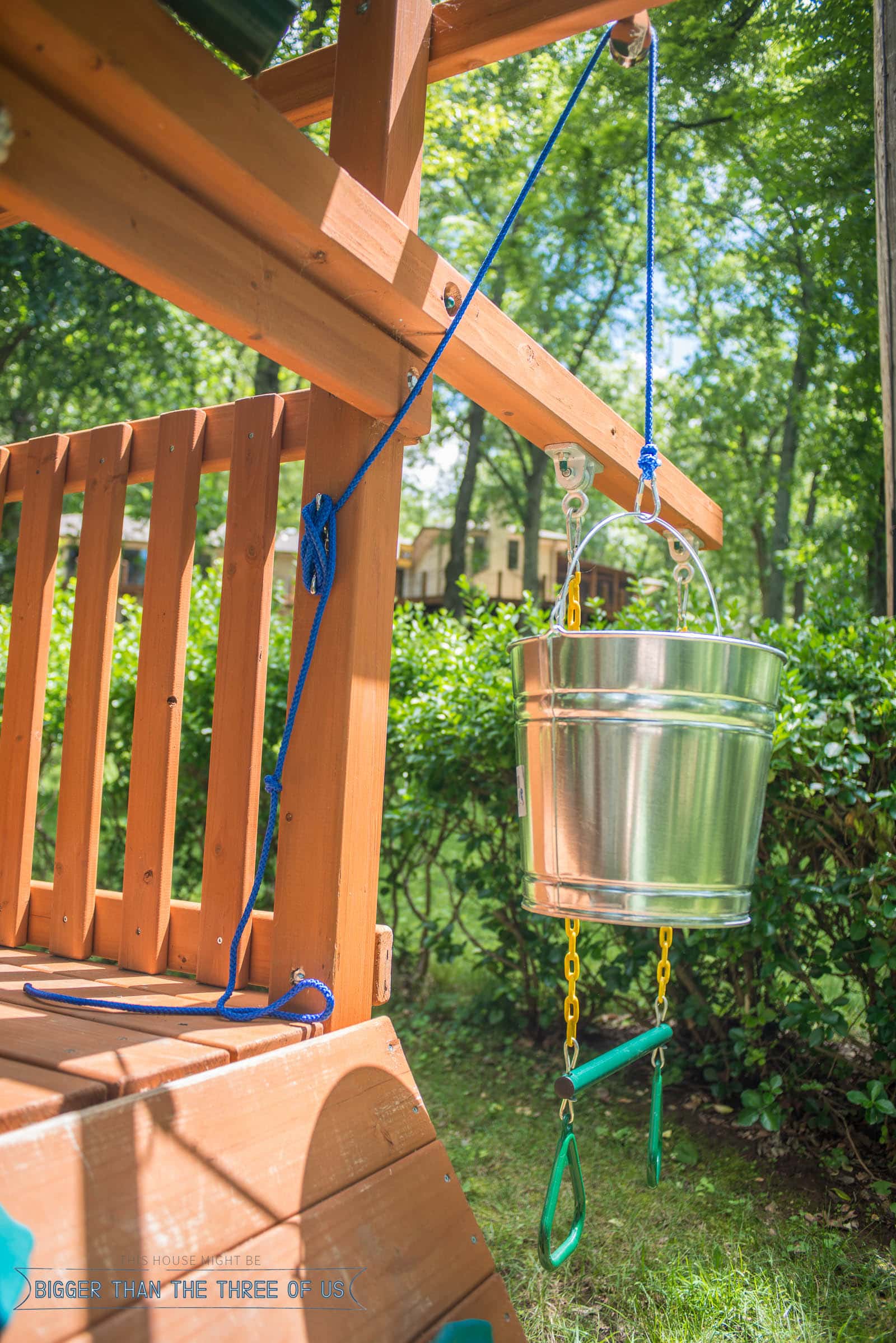 Special thanks to BLACK+DECKER for sponsoring this post and for introducing me to the AutoSense Drill with it’s automatic clutch.

How To Add a Bucket and Pulley to a Playset

When we were thinking about treehouse ideas and potential add-ons for the treehouse, I was blown away by the prices of all the treehouse accessories. Seriously, most of the treehouse swings start around $100 and go up. I knew my little guy would love all those higher-priced accessories but I also knew that he would love a simple treehouse addition as well. I think Luke was the one to mention that we should just add a treehouse bucket pulley system. To be honest, when he mentioned it, I wasn’t even sure what a pulley was! So, first off…

A pulley is basically a wheel with a cord (or chain) that goes around the wheel. A pulley lessens the amount of strength (or force) needed to raise a heavy object. They are often used with heavy objects but can be a super fun, simple DIY machine for kids to make and play with as well.

This project would totally work with a treehouse or even off a back deck. I think it’s just something that adds some fun and excitement no matter where you put it. 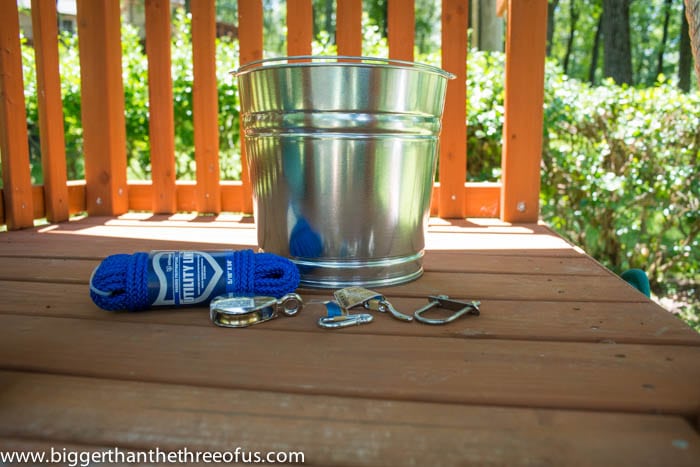 As far as tools go, you will only need a drill.  We used the BLACK+DECKER Autosense self-torquing drill. No more arm wobbling because of the weight of the drill. This baby is light and powerful!

How to Make a Simple Pulley For Kids

Start by deciding where you want your bucket to hang. For us, we wanted the bucket to be accessed from the top of the treehouse but safely without having to reach out too far to grab it. We determined that it would be best for ours to hang out on the side by the monkey rings. Our monkey rings extend off the back side of the treehouse on a separate arm of the play set. We wanted our little guy to be able to pull/lower the bucket without hitting anything and also be able to use the monkey rings while the bucket was down.

Next, you need to determine placement on your beam. We centered ours from top to bottom. Once you have determined placement, drill the holes for your hook. I’m sure you can find different hook attachments, but we went for a C-shaped hook that has bolts attached. You basically drill a hole through the beam in the treehouse that is the same diameter as the bolts of the C-shaped hook. 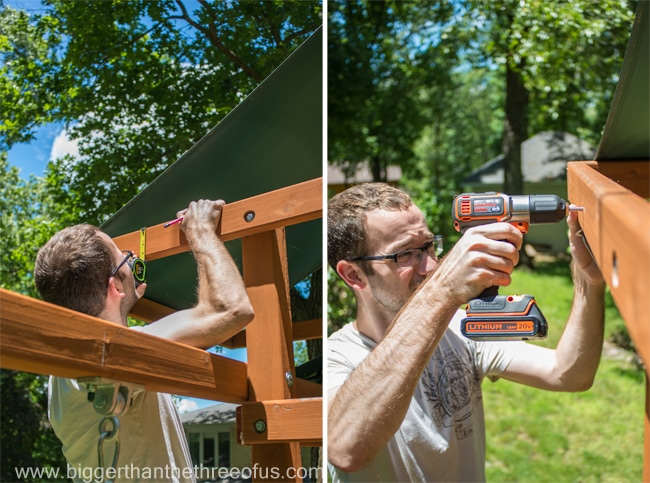 Before you install your hook, you will want to place your pulley on the ring of the hook. Most pulleys that we looked at had a ring attachment at the top so all you need to do is slide the ring over the C hook. Then, install the hook into the drilled holes. Tighten up the bolts on the back of the C hook to fasten. 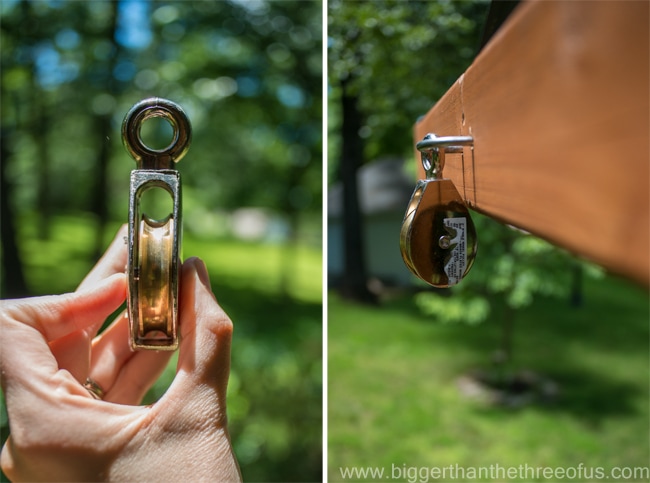 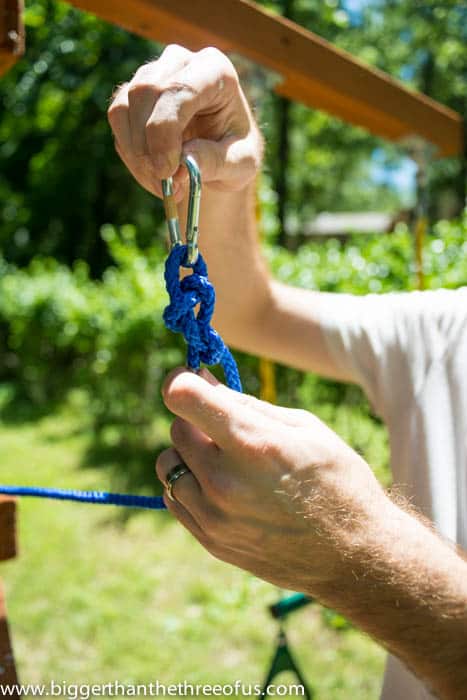 Once you have your knot made, hook your carabiner on to the bucket. 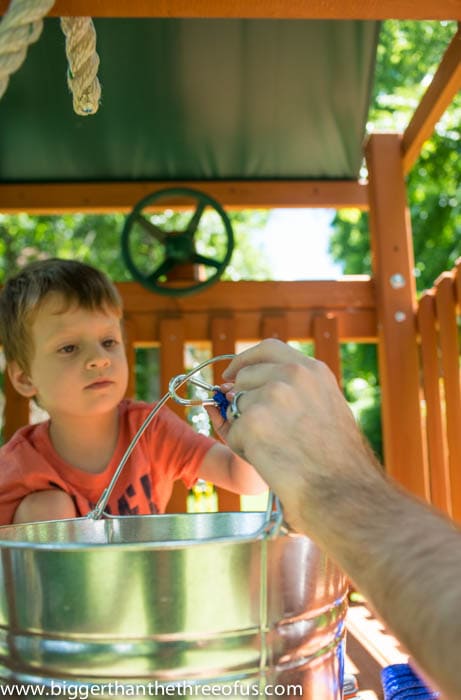 Thread the opposite end of the rope through your pulley and then burn the edges of the rope so that you don’t have any fraying. 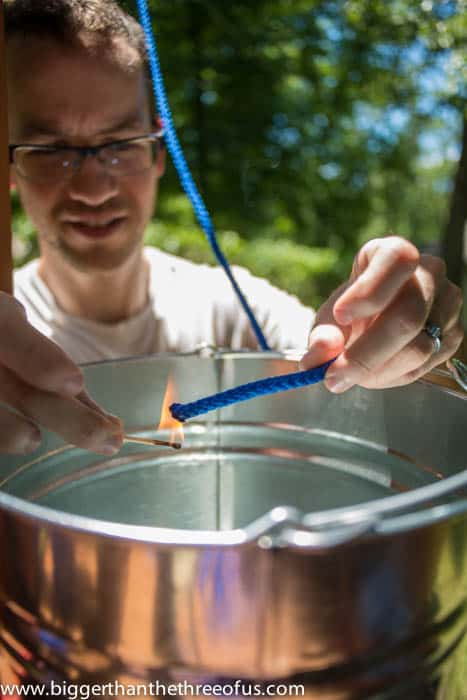 Inside the playset, decide where you want your cleat to be (where your rope ties off). Make sure the place you choose is easily assessable for little hands/arms. The cleat is what is going to hold the excess rope when you have the bucket up. When the bucket is on the ground or being used closer to the ground, the cleat will not be holding any rope. 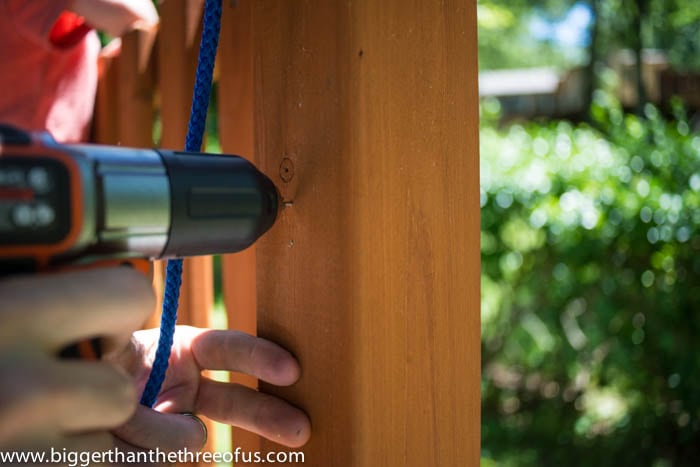 Once you have determined where you want your cleat to be, screw the screws in to hold it in place.  So, the cool thing about the BLACK+DECKER 20V Max Lithium Drill is that it has an automatic clutch, meaning that you just set the drill to drive mode and it determines when your screw is flush/in. 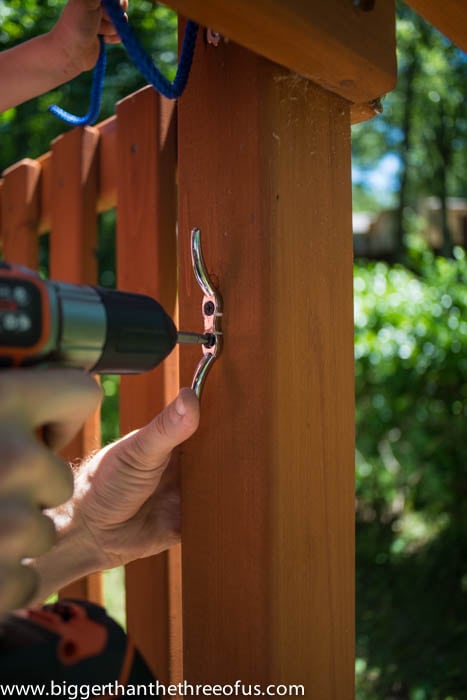 That’s it! This bucket and pulley project took us about an hour! I love inexpensive and fun kids’ projects! If you are looking for more simple projects for kids, we did a car light switch and also a firetruck lamp. 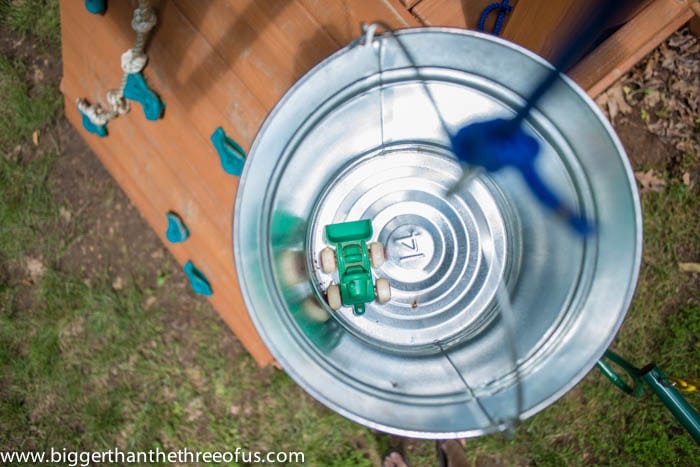 Pin For Later: Bucket and Pulley DIY For Kids

I’ve had a list of encouraging words and phrases for kids up in my pantry for a long time. Recently, I decided that I needed to create my own printable for encouraging kids that was specifically geared towards school-aged kids. I encourage you to step outside the box of saying “good job” and print this list of words of encouragement for kids.

I’m a big fan of sticky notes. I use them at my computer all the time. I’ve used them in the past, off and on, as a reminder for something. There’s just something powerful about being reminded about something daily by reading it.

A few months ago, I was sharing our small pantry organization on Instagram and someone messaged me about the printable that I had taped up. The paper that I had taped up was about ways to encourage a child. It was mainly geared towards younger children and I’ve gotten rid of it since then.

The concept of taping a piece of paper for a reminder though has stuck with me for years and I realized that I need to remind myself to encourage Greyson with different types of positive words and phrases. So, I started keeping a list of encouraging words and phrases that I used, that Luke used, that the school used and decided to put them together in a free printable for you. 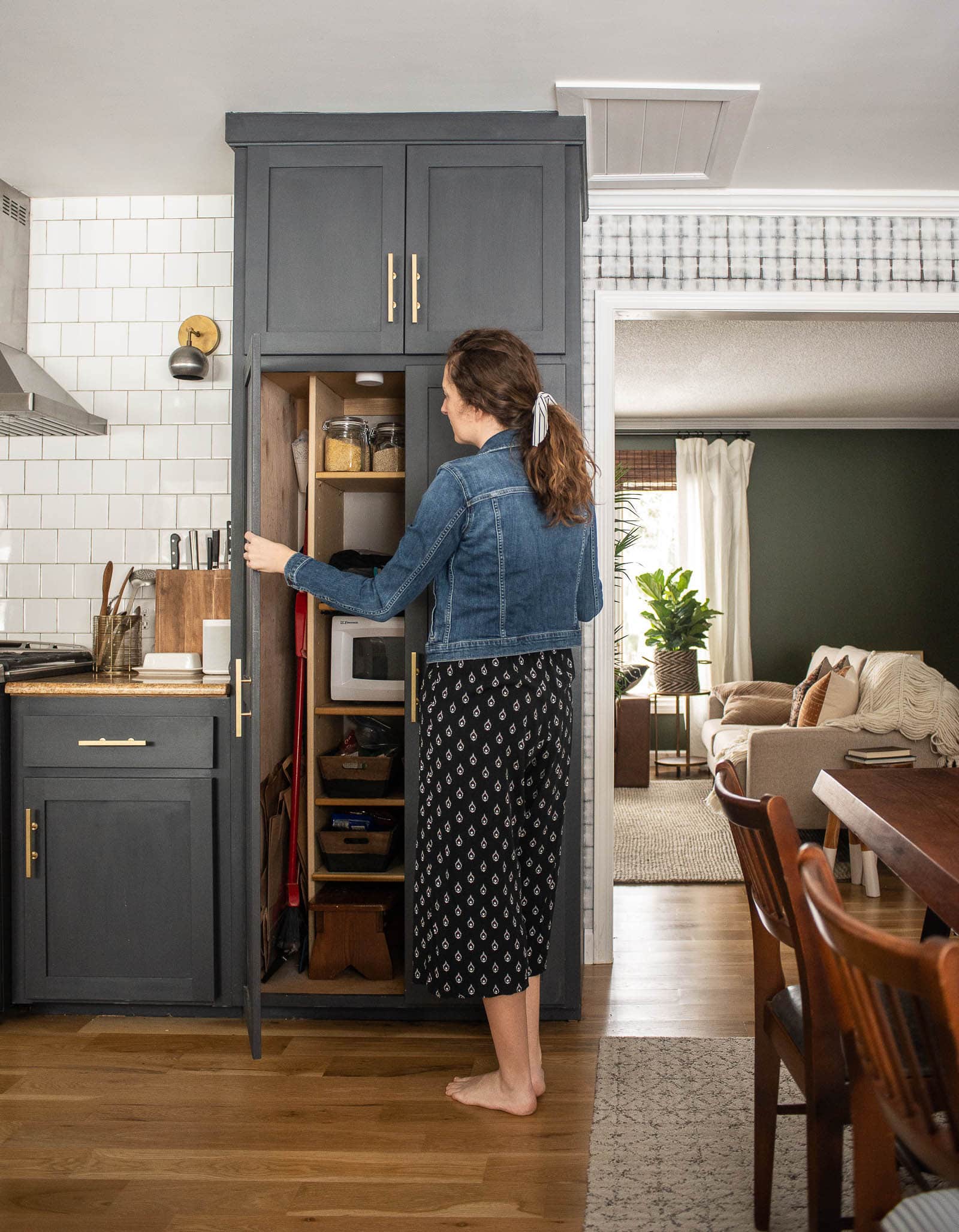 Like I mentioned earlier, I’m used to keeping this sort of printable in my pantry but you could keep it in your medicine cabinet, on your wall, or your desk. You just want to keep the list of encouraging words and phrases handy. The goal is that, by seeing the list, you are reminded to actually use it!

END_OF_DOCUMENT_TOKEN_TO_BE_REPLACED

I don’t know about you guys but we are four weeks in on Summer break and Greyson is already bored. The first week of break, we chilled at home and did a few playdates. The second week, he went to Florida and did the whole Disney thing. The third week, he did superhero gymnastics camp from 9-12, Monday-Friday. The fourth week (this week) we’ve been to two swimming pools (on two different days), the lake with my family, the library (twice), regular errands (grocery shopping, etc. ), and have another lake day planned with friends on Friday. All of that is to say… we’ve been going places and he tells me he’s bored. Are you serious? Yep, he’s totally serious. So, to combat boredom, I looked for new toys. Then, I thought… I’ll make a new toy and make it an outside one. That’s where this tutorial – How to Make a Tightrope for Your Kids comes in. 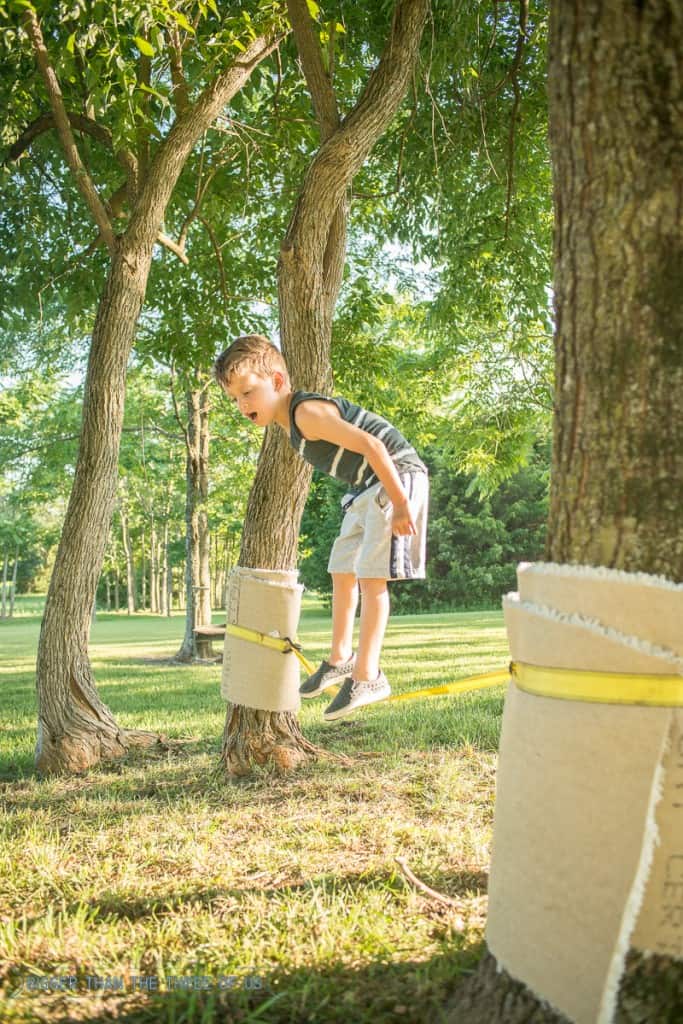